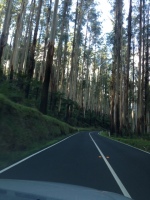 I am in Marysville tonight. The drive up here through The Black Spur was as breathtaking as ever, but sobering as its the first time I’ve made the trip since the devastation of Black Saturday. I still recall the newscast that announced in stunning matter-of-fact tones, “Marysville is no more”.

I am here to work with an Executive Team, in part to debrief a crisis period in the organisations’ life. We are intentionally in Marysville to hear from and learn from community leaders who have shaped the path to recovery for the community since that fateful day in 2009. The stories of resilience and resolve of people who have chosen to rebuild their lives here leaves us with humble respect. With no path already worn, with no right way to act, we are told of the daily commitment to simply put one foot in front of the next. While vision for a hopeful future shines through, the mayor leaves us with no uncertainty, ‘just getting back to sustainable’ is a far enough goal.

What does it look like to lead effectively in the context of crisis? Many of the normal principles appear not to apply. I have got some ideas which I am going to test and refine with the group tomorrow, and which I will post in the next couple of days. In the meantime, I wonder what you have learned about leading in times of crisis?