This is pretty dense with cross references which I want to link for future reference. 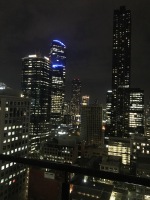 back at CityPoint … a familiar view

It’s mid-April in the city. The warm days keep intruding on Autumn but sitting outdoors at a cafe at 9pm in windless, high 20s, taking in the night rhythms of the west end is good fun …
The paradox of having multiple projects on is that I read more … something about needing to feed my brain in order to keep the output energised and fresh.
Anyway, earlier this evening I was grateful to finish reading Jordan Peterson’s 12 Rules for Life. I read it knowing I’d find it both good and bad. The good bit is that I enjoy engaging people who operate with unfamiliar mental models.  He is super smart, eccentric even, and I love delving into the minds of radically intelligent thinkers. I do however find myself disagreeing with where he ends up on some topics. But I chose to read him intentionally. I chose to suspend judgement and listen, really listen. Too often we consume intelligence that we already broadly agree with, and so we create in our minds a growing illusion that people who disagree with us must be stupid or wilfully selfish or evil even. So while I disagree with where he ends up sometimes, I certainly do have a greater appreciation for why he and others have such a distain for political correctness. (Jonathon Haidt’s work argues compellingly that we must do this more. see his first TED talk here.)
But my main reason for digesting Peterson was because I had set myself to go deeper into the parallel universe that is Nassim Taleb’s view of the world. And like Taleb, Peterson is concerned with understanding how to live well in the context of chaos. I knew I’d find more of Taleb that was aligned with what I already believed, so wanted to read Peterson as a counter.
I first heard of Taleb’s work via Issue 1 of The Alpine Review. Like a very few other other big ideas I’ve come across, I sensed there was something in this that would be important for me. As I read the other day, mental models are the new alphabet, so I’m thirsty for new ways to see and therefore make sense of this crazy world. Taleb and Peterson certainly both offer different ways of seeing the world.
Taleb has spent his career trying to understand uncertainty and randomness. Both he and Peterson hold the view that chaos and randomness are not bad per se, and are not to be, indeed cannot be avoided. Further, it turns out that most of the really significants things that happen in our lives can be traced to random events.
But many of the systems which define modern life are fragile. Random and unpredicted events can cripple whole sets of infrastructure. One apparently isolated occurrence has ripple effects across nations and the world. (Just think about the impact of volcanic ash or the 9/11 terrorist attacks on air travel. Or think about how the apparently untouchable Facebook could be out of business in a relatively short period of time when trust is broken.)
Most people, when asked, say that the opposite of fragile is robust (or similar). But Taleb argues this is not the case. If a package is marked fragile, it means that its contents will break if subjected to trauma. The opposite would be if the items got stronger if/when subjected to trauma. So Taleb is in search of those things that are improved by randomness, uncertainty and even trauma. Things that are antifragile. His argument is that we can glimpse the future by taking notice of those things which have antifragile attributes. Or the corollary; we know that if something is fragile, its time of dominance or prominence at least will be limited.
I recognised in this reasoning something of what I was grappling for in my manifesto. The idea of generativity comes on the back of this. It’s also a bit akin to Peterson’s idea behind the 12 Rules for Life – what is the smallest number of essential things a person needs to know in order to live well? My thesis is that three drivers (pleasure, betterness and meaning), on two foundations (home and community) and four disciplines offer a generative life – a life that feeds itself with ‘the quality that cannot be named’ (from a masterful chapter in Christopher Alexander’s The Timeless Way of Building. Alexander goes through multiple alternative (English) words that capture elements of that quality that is recognisable in a room or building but for which we don’t have an adequate word. If I was in conversation with him, I’d offer ‘generative’.)
I have recently had an email exchange with Paul Hawken, whose Natural Capitalism gave me great hope when I read it more than a decade ago. For many years now people have been lamenting that the term ‘sustainability’ has lost its meaning as it gets co-opted ubiquitously. But like many others, I have struggled to think of an alternative. Until now.
Paul’s upcoming book will be called Regeneration. It comes from the same thinking as Taleb’s antifragile. We can’t get to a solution to todays problems by using the same thinking that got us where we are. ‘Robust’ is about risk mitigation against fragility – but that’s not enough. Sustainability is about risk mitigation against depleting natural resources – but that is not enough. We need radical new thinking to change the game.
Taleb says, how do we build systems that actually thrive on uncertainty and randomness? Hawken says it’s not about sustainability, it’s about creating a society that engages the natural environment in a way that actually regenerates it. I am interested in the ingredients that facilitate better living when we encounter the normal terrain of contemporary society; those disciplines and mental models that provide generativity amidst normal chaos.
A bit to think about …