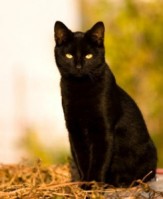 Cricketing god Sachin Tendulkar reportedly always put his left pad on first when preparing to bat while any number of football players apparently have lucky game-day undies. At some time or other most of us have probably adhered to similar, if less passionately held superstitious customs, things we do that we believe will fend off misfortune or bring us luck. “Something old, something new and something blue”.

In our sensible moments, we educated folk consider superstitions as quaint, and even a throw-back to pre-enlightenment times. The idea that an object or something in the physical world could impact the outcomes in the more mysterious and less predictable world of performance or circumstance is very unsophisticated indeed.

But I have been pondering a kind of modern superstition that most of us have bought in to. Contrary to what we know to be true, we still sometimes expect that stuff in the external physical world will have a cause and affect impact in another, unconnected part of life.

The socialisation of these superstitions is relentless and strong. They become so ingrained in our thinking that to challenge them is often regarded as a bit wowser-ish. We have been indoctrinated into thinking that happiness and satisfaction is a result of stuff that happens in the physical world.

No one can deny the pleasure that is associated with good times or more wealth. But is it a cause and effect relationship? Do these desirable feelings come from these things that we are conditioned to believe cause them, or from somewhere entirely different? Some very significant and formative assumptions need to be challenged.

Euphorically positive emotions or deep pleasure are incredibly addictive experiences. Once we’ve tasted them, or been shown them via desirable social images (whether commercial, religious or some other tribal expression), the drive to replicate the experience is insatiable. And contrary to less socially acceptable vices such as drugs or sex, we are positively encouraged to go after them … more financial security, better health, more prestigious cars and houses.

A major problem emerges. Just like easy target addictions like gambling and drugs, the cause-and-(desired)-effect-relationship just isn’t sustainable. Even if we catch a fleeting experience, it is a slippery sucker and sustaining the sensation is like running up a soapy waterslide.

Does this mean that we are never happy, satisfied, fulfilled or at peace while we chase these apparent facilitators of all things desirable? Of course it doesn’t. But to draw a cause and effect link (like the car ad tells me) between owning or driving the car and my relationship with my partner, or the overseas holiday and my sense of freedom, is on the same level as thinking that Tendulkar will fail if he puts his right pad on first. The two things are realities in a different domain. When the two things occur simultaneously, drawing a cause and effect link between them is not only a brand of superstition, it can precipitate a spiral of addiction that leaves us insatiable and wondering why we never feel fulfilled.

It is a healthy thing to be sceptical about the cause and effect relationships that our society tells us are self-evident. Especially when the linked realities aren’t even in the same realm. Interrogate away people, it might just free us from some superstition.