It was when I was learning Japanese script in the early 80s that I understood the concept of a radical for the first time. I had previously misunderstood the idea of radical as being ‘progressive’ or ‘different’. Not so, in fact the contrary. Chinese characters, which form part of the Japanese script, can be organised into groups based on their foundations. These foundational or source elements I learned were called radicals. And so I understood that radical has to do with the ‘fundamental nature of something’. (go look it up and you’ll see)

The common usage of the word has apparently come about due to the tendency of people to lose sight of original intents and purposes; the radical is therefore someone who reminds people of the fundamentals. Those familiar with the Judeo-Christian story will recognise the prophetic tradition here. 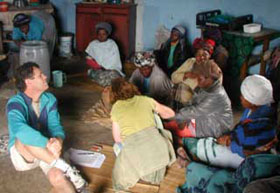 Brett is a striking model of a true radical. I got to know him when I moved to Melbourne in the mid 80s when we shared a house along with our mate Jim. Brett was always full of mental energy and I found myself drawn into meaningful discussions about how to live with integrity in a whole new way. He was renowned among those who knew him for his machine-like approach to life – which was an attempt I think to capture his no-nonsense, consistency, coupled with extraordinary intelligence and productivity.

In simplistic terms, if we were going to map people on a style – substance continuum, Brett would be off the scale up the substance end. Which is not to comment particularly about his ‘style’, although family and friends love to jibe about the jumpers he wears for seemingly decades and I do recall a pair of runners that he kept together with tape for a comical period of time. Which would not be so startling if his vocational home was in a grass roots community organisation. But he is Professor Brett Inder, Head of Econometrics at one of Australia’s leading universities. For Brett, his expertise in economics is a means to making the world a more just place. (talking about equal opportunity and diversity at Uni)

While many people discuss fantasies of communal living, Brett and Jenny just did it. They purchased a house across the road from the Uni and over time managed to secure the use of 2 or 3 more around them. Their home is always open and when you drop around to visit there are always other people around, including (foster) children in addition to their own. When Brett got interested in Fair Trade and joined the People for Fair Trade Collective, their garage became a warehouse for tea and coffee, purchased directly from farmers for distribution to people in Melbourne committed to helping to offer a better deal for coffee growers.

Brett has always shunned a public profile. However on October 21st 2002 he found himself in the media spotlight when he helped to restrain a student who had taken a gun into class, opened fire killing two and injuring seven others. The bravery and courage expressed through that act is entirely consistent with Brett’s way of life.

Mate, you have been a profound inspiration for me. Your ability to see and hear the essence of what matters through the noise of the crowd is a rare thing. There are any number of people whose identity is wrapped up in radicalism. But you are a model of someone who seems to grasp the substance of the issue irrespective of whether there is a community of support around it. My life is always richer having ‘chewed the fat with you’. Your generosity and friendship have been a treasure through time.

One thought on “a web of simple thanks: part 2”